Museum of Tropical Queensland in Townsville is just over the road 150m away!

The Museum of Tropical Queensland is a museum of history, archaeology and history located in Townsville, Queensland, Australia.  It is located in the same building as the Reef HQ Aquarium. In 1987 the museum opened as the "North Queensland Branch" of the Queensland Museum.

The museum houses artefacts recovered from the

One of the displays is that of the wreck of HMS Pandora, which is one of the most significant wrecks in Australian waters. The Pandora sank off the coast of north Queensland in 1791after capturing some of the crew from the mutiny on the Bounty. 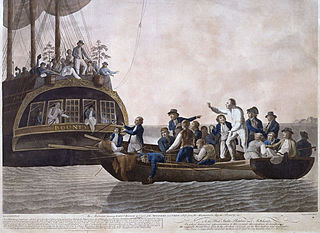 A painting By Robert Dodd.depicting the mutineers turning Bligh and some of his officers and crew adrift on 29th April 1789.

The wreck of the Yongala which has become a tourist attraction and dive site, was not found until 1958.
The passenger ship SS Yongala sank on 23 March 1911 off Cape Bowling Green, Queensland, Australia
while sailing from Melbourne to Cairns as she steamed into a cyclone and sank south of Townsville. All 122 aboard were killed, it wasn't until days later, when cargo and wreckage began to wash ashore at Cape Bowing Green and at Cleveland Bay that is was discovered to be missing. It was believed that the hull of the ship had been ripped open by a submerged rock.

For more information go to http://www.mtq.qm.qld.gov.au/Visit+Us#.U65h2UAn-6M