AIMS has been doing great research into the effects of Global warming pollution flood water and runoff and they undertake research that bring to light the needs sustainability of the Battier Reef and hopefully supplies impartial advice that supports both the use and protection our beautiful Great Barrier Reef, now and into the future.After having a number of international Marine Biologist staying at the Reef Lodge while attending a conference, then discussing some of the issues for the future of one of the world Great wonders. I went to and read about some of the great work they are doing.


Below is an extract from the website http://www.aims.gov.au/docs/about/about.html as well as some links to the research they are doing.

"AIMS has a national and global reputation for research on tropical marine ecosystems. The Institute provides the knowledge and information required to underpin the sustainable development and use of Australia's marine resources and to support effective management and stewardship of our marine estate.  As a Publicly Funded Research Agency, we provide outcome focused support for key stakeholders including government regulatory and management bodies, marine-based resource industries, the tourism sector and the general public.

Our activities are arranged into four science programs in order to ensure that our research has the highest possible impact: "

The Australian Institute of Marine Science (AIMS) is Australia’s premiere tropical marine research agency.
We play a pivotal role in providing large-scale, long-term and world-class research that helps governments, industry and the wider community to make informed decisions about the management of Australia’s marine estate.

To undertake research that addresses real needs and provides impartial, authoritative advice, and that supports both the protection and sustainable use of our marine heritage, now and into the future.

How are we doing this?

We are achieving this through innovative scientific and technological research, and with the help of our people,  industry and research partnerships, infrastructure, and comprehensive data sets.
This work includes:


Our history—from exploration to action

Established in 1972, AIMS was an explorer in its early years: defining the Great Barrier Reef and its biodiversity, and introducing Australians to remarkable marine ecosystems across northern Australia.
In the past 20 years, our focus has turned to monitoring and understanding the changes we see in these ecosystems, from Western Australia’s Scott Reef to Darwin’s coastal waters to the Great Barrier Reef.
The next decade will be one of action: helping to sustain and repair these ecosystems in the face of a changing climate, and creating the tools to enable the best possible planning and decision-making for conservation and sustainable development of the energy, mineral, tourism and food resources in and under our tropical oceans.
Below are some links to some of the research being done by AIMS

For more information on thi subjecs or if your just after accommodation ask at the reception at Reef Lodge Backpackers Townsville, Queensland Australia. Or, contact us through our website www.reeflodge.com.au or Phone 07 47 211 112
Posted by Unknown at 23:33 No comments:

What is there to do in Townsville? Just off the coast of Townsville is the ship wreck of "The City of Adelaide" which lies in the mud flats of Cockle Bay on Magnetic Island's.

The City of Adelaide was launched in 1863 as a passenger steam ship in Glasgow, Scotland. The ship was to be converted to a Barque for the use as a cargo transporter vessel. The vessel was gutted by fire in 1912 and in 1916 the burnt hulk was then run aground on Magnetic Island, in Cockle Bay just off Townsville. During World War two, during a R.A.A.F. training drill four people were accidentally killed when the aircraft struck the masts of the vessel.

Magnetic Island's most prominent shipwreck,
which lies in the mud off Cockle Bay. 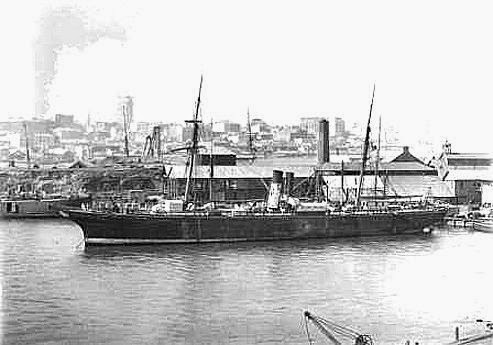 "The City of Adelaide"

She was then sold in 1890 to W. A. Ritchie, of Sydney, then converted by removing her boilers and engines to a four masted barque. In 1895 the ship was sold to G J Robertson from Sydney. Then, in 1902 the ship was sold to Howard Smith Company in Townsville and used for a hulk and the storage of coal. The vessel caught fire in 1912 and burnt for a few days before the fire could be put out. The burnt hulk of the vessel was then purchased in 1915, by George Butler. Butler had the hull stripped, and an attempt was made to float the vessel to Picnic Bay where it would be scuttled to provide a breakwater for a jetty. However, as the vessel was being transported it ran aground off Cockle Bay.

During World War II the wreck of the vessel was used for target practice by bomber pilots from the nearby air strip at Garbutt.  October 22nd 1942, six R.A.A.F. Bristol Beaufort bombers from 100th Squadron while conducting a coordinated mock torpedo attack on Townsville Harbour followed by a coordinated practice bombing of the wreck of the SS City of Adelaide. After a successful simulation attack on the Harbour, the six Beaufort bombers climbed to approximately 1,000 feet into V formation over Cockle Bay. A number of the Beauforts proceeded on a mock bombing run on the vessel at which time one of the aircraft was seen to strike one of the masts of the ship, crashing some 700 meters from the ship hull with the aircraft fuselage breaking up and disintegrating on impact, killing all the crew of 3 RAAF officers and 1 US Navy Officer
Today the remnants of the hull has become an artificial island with a variety of plant, bird and marine life making this their home. The wreck is approximately 300 meters off the shore of Cockle Bay and can be easily reached at low tide.

For more information or if your after accommodation ask at the reception at Reef Lodge Backpackers Townsville, Queensland Australia. Or, contact us through our website www.reeflodge.com.au or Phone 07 47 211 112
Posted by Unknown at 15:40 No comments: